It’s always a pleasure to connect with like minded professionals that question the status quo and base their approach on scientific evidence instead of trends. With that in mind, our quest to learn and understand more continues in this chat with physiotherapist Sangi Patel. 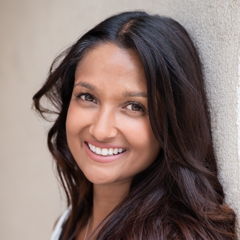 Sangi has a masters in Sports Physiotherapy and has a ton of experience working with Premier League clubs, WTA athletes and private clients.

In a nutshell, tell us a bit about your career.

I spent my first year after graduating doing the basic rotations in the NHS, which was the thing back then, and actually in hindsight, I’m really glad I did. Meanwhile I started working part time with Crystal Palace Academy whilst also working in the hospital as I had always wanted to work in Sport but hadn’t realised what an opening this would be. I hadn’t really thought about getting into football until an opportunity came up for head physio. They interviewed the internal candidates first, of which I was one, and strangely I got it.

I say ‘strangely’ because I was the only female. Everyone else was male and we were all quite new so I give that credit to the Academy manager at the time who interviewed me, he was very pro female physios. I spent the best part of three years in the Academy and then I was promoted as the assistant first team physio. One year later I went over with the manager and the other medical staff  to Queen Park Rangers where I spent 18 months as assistant Physio.

After nine years in football I decided it was time for change and I moved to a private clinic.

Do you find any differences between athletes and non-athletes when you treat them?

Yes. Purely because as an athlete their focus is to have their body at it’s best, so they follow meticulously what you give them. In the private sector people normally have less sessions even with insurance, have a full time job and a bunch of other things that sometimes they prioritise more then doing the exercises I give them. Other times when they come privately the financial aspect weighs on their decision and they decide to keep being their own Personal Trainer, one that clearly is not as specialised as yourself.

How would you describe your approach? What’s unique about it?

I treat everyone differently. I don’t have  a set protocol of how I conduct my work. I maneuver with what I’m getting from the patient and the language I use as well.

Do you agree with us when we say that part of our job is to educate our clients about their injuries and body?

Absolutely, but they have to be slightly receptive. I have become more open in my personal life, and now I’m transferring new things I’ve learnt to my work. For example, being mindful and using breathing techniques. This has become especially key with mental health and anxiety and neck pain spikes that we’re seeing during COVID.

But you’ve got to pick your patients when you talk about things that might seem a bit out there, because if you talk to someone about breathing they may wonder what in earth you are talking about and how it applies to them. Though sometimes then the media promotes a podcast about breathing, and suddenly everyone jumps on the bangwagon.

In your opinion, how important is that your clients continue with appropriate exercise after/while you see them?

What do you think about social media influencers regarding exercise and rehab?

There is so much out there and I think the real danger with doing things like that is people will over do it and their technique will be wrong. I’m not a fan, but I definitely see that it has its place. On the other hand, people buy into the visual aspect. If some social media person looks the part, has the body and/or speaks clearly regardless of the accuracy of their statements, I can see why people will fall for that.

Fun Fads – what’s the first thing that comes to your head when you read about the following fads:

What’s the best exercise for back pain?

Good question. A lot of people have been asking me about that. I think they have their place, but I would not actively recommend them.

Sangi is based in Harley Street and in Eton. For more info click here.